A partial telling of the Story of the London Underground 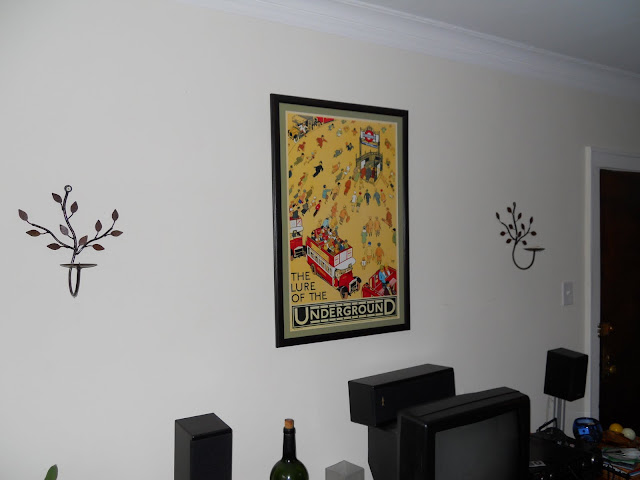 It should be no surprise that a major part of my visiting London involved a growing fascination with the London Underground.  I tried to catch as many pictures and ogle the tile work of the tube stations I visited as much as possible without blocking pedestrian traffic.  Sadly for me, London Transport officials have stopped allowing public tours of the derelict stations, of which Down Street was high on my wish list.  But I wandered happily around where I could, paid a visit to the richly curated London Transport Museum (where I bought the souvenir you see above) and I recently watched for the last time The Story of London’s Underground, the cheesy 2006 doc I’ve had on loan from Netflix for over a month. The music is annoying and the presentation grainy but the information is fascinating to someone who’s a little fanatical about finding bits of history about the London Underground. 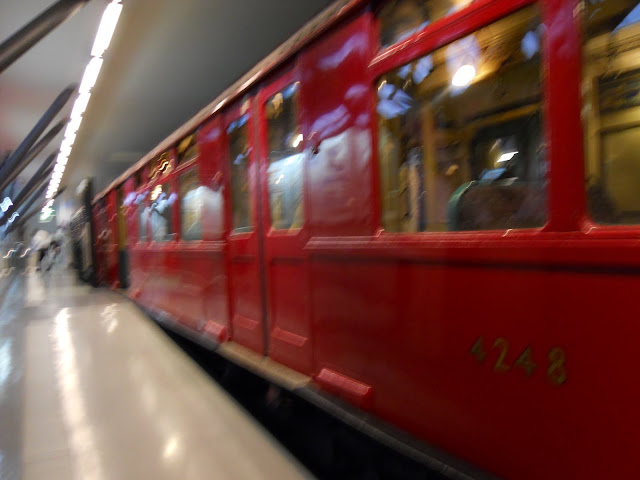 In as early as 1800 London was the largest city in the world.  In the early years, horse was the only way to get around and traffic congestion was a huge problem.  A commission started in 1855 looked at the problem of traffic congestion and one of the members of the commission, solicitor Charles Pearson, saw public transport as a way to clear London slums and get the poverty stricken, disease ridden populace into safe, affordable homes.  At the end of the Crimean War, parliament voted public money for a vast network of sewers, fearing the city would not survive without them. Thus begins a new London under ground.  Cholera practically disappeared and London engineers began to lead the world in tunneling.

The horse driven bus first enabled London to grow outwards but by the 1840’s London had grown beyond an hour’s ride to the city center. The arrival and development of the steam rail by 1829 didn’t solve anything, because the main railways wanted to build their termini as close to the city center as possible. A commission early on decided that railways couldn’t build too close to the city center because of the destruction of property that involved. As a result, they came in to a periphery of the city so that people arrived into London by train and immediately wanted to go elsewhere, which meant either by foot or by horse drawn cab.  So the railways brought more and more people to London and actually made the congestion worse. Pearson’s idea was to connect the mainline railway stations with a new system, the issue being how to build it when London was so built up. Money was raised and work actually started by cut and cover tunneling – dig a trench, put a railway at the bottom and here and there roof it over so that property could be restored on top.  Today’s Maryleborne and Euston roads cover the first section of tunneling.  In many cases they did actually have to purchase property and demolish it.

Steam was the only viable technology present to propel the trains and they had areas of open tunnels to allow the steam and smoke to escape. A condensing engine was developed to consume its own smoke but it took some revising.  The 1866 engine for the Metropolitan Railway was the most successful first development, used until 1905.  In 1864 the Met started to issue workman’s fares – costing less for the skilled working class to move out of the center to Hammersmith, Waterloo. The system was the first classless public transport with no classification for seating. 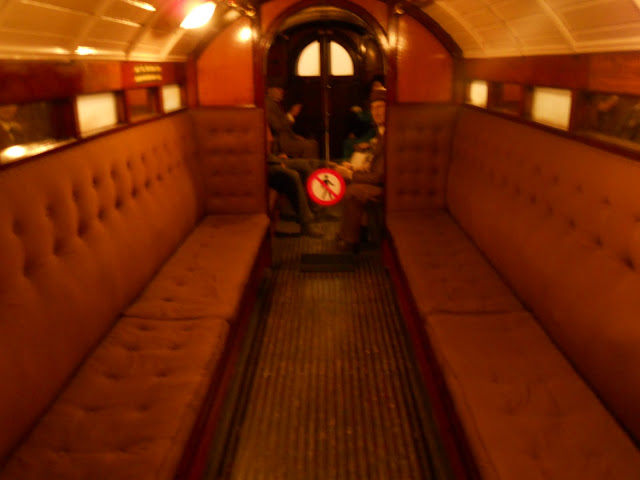 The construction of new suburbs did not take place as rapidly as Pearson envisioned while the slums were being torn down and the central tunneling of the Met didn’t really extend outwards as much as envisioned meaning it didn’t solve the congestion as much as it was hoped to because the lines circumnavigated the city center.   The concept was okay but clearly the cut and cover record wasn’t working and was too expensive.  They needed to find a new engineering method.

Marc Brunel constructed the Thames Tunnel, a 20 year long financial disaster, started off an engineering process of a tunneling shield held back the walls while the tunnel was bricked off.  He succeeded at building the tunnel eventually but his technique, developed by James Henry Greathead and William Henry Barlow, using hydraulics, would erect an iron lining behind the shield advancing the tunnel by 13 feet a day.  The fact that beneath the city was there was a huge bed of clay, made this kind of tunneling possible. 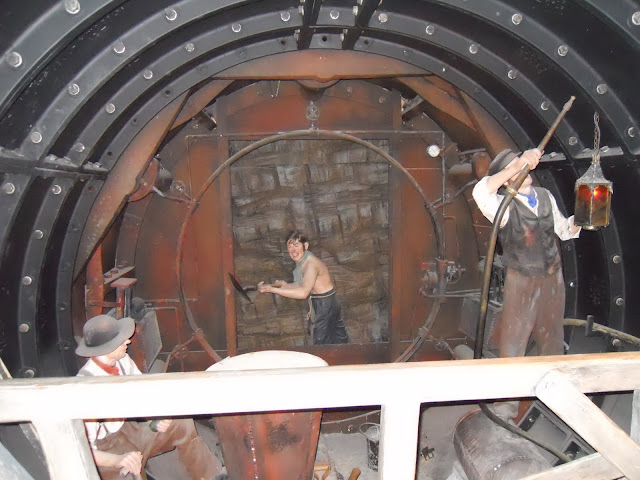 Propelling trains still being a problem that deep under ground, steam powered cable hauling was tried but in 1888 an inventor and engineer named Frank Sprague proved that a number of trains could be run simultaneously by electric motor in Richmond, Virginia. First everything was built too small to make enough money, the first effective tubeline ran from the city out to Shepard’s Bush.  Infamous financieer, Charles Tyson Yerkes arrived in London from Chicago to persuade the Americans to finance a plan to further the underground by 1907, providing electrification and the building of a number of new lines. 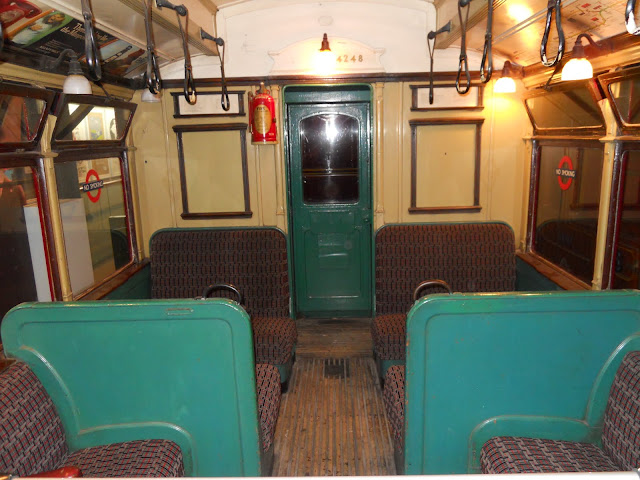 The new system had a distinct marketing problem asking pedestrians to feel that going underground was safe, clean, easily accessible and sensible. Frank Pick lead the charge on developing a bold marketing move across the board. The use of high quality graphic design was established, with new artists and traditional designers creating beautiful poster art advertising the system.  A new typeface was commissioned in 1916 and the Bar and Circle logo was developed. Charles Holden created a functional and marketable design for new stations utilizing the logo design that was also highly functional.  And in 1933, a man named Henry Beck designed a map of the underground system some say revolutionized the way the public perceived the system (though not all agree). 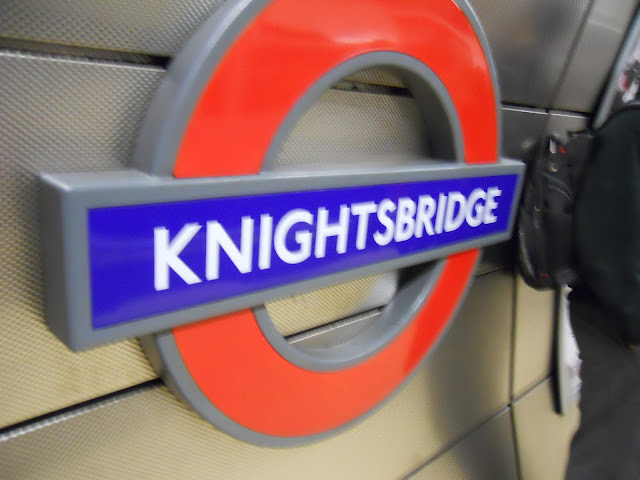 Investors in the development of the underground were also investing in property in the green fields surrounding London, knowing that suburban development would soon follow. “MetroLand” was begun by Metropolitan Railway, given free reign to develop land as they wished, establishing ten huge estate near the railway, encouraging other developers and builders through 1933.  The West End flourished thanks to public transport, what was once an upper class residential area without commercial business development welcomed big department stores, theaters and movie houses, creating a great draw for the public.

World War I saw the first use of the tube as a bomb shelter which returned in World War II.  While some bombs did fall on stations and lines, people by the thousands would bring their families underground and lie there on the platforms through thesuspenseful nights. In 1942 some stations were converted into underground arsenals and munitions factories.  Here’s a clip from the doc about that:

Of course after I dropped the doc back in the mail I found these clips online that are much better. Oh well.