No. Its Just Door. D-O-O-R. Like something you walk through to go places.

So a couple of weeks ago Paul emailed me about how Neverwhere was like The Wizard of Oz but turned on its head a bit. Richard wants to get home but Door sounds like Dorothy. What are the roles of Hunter and the Marquis in that party if you want to extend the comparison

Of course the story makes it clear that Door is just Door. It is not short for Doreen or Dorothy. If anything Door, because of her ability is like the physical doors in other fairy tales, the door to the wardrobe, the hole in the ground. So many fairy tales start with some sort of entrance. Of course, the old woman warns him to beware of doors.

Door’s whole family are “openers” and their skills allow them to find and open doors and locks. The names of the family are all portal names. Door, Arch, Portico, Portia and Ingress. (I have to point out that Portico also refers to the colonnades where Greek philosophers met – which is appropriate for Door’s father.) Richard does find a door to another world.

I was struck when I was rereading the novel how twice uses her skill in a way that shocks her once she opens to save herself from the assassin and kills him. Once she reaches out for somewhere safe then, at the last moment, thinks “someone.” She calls a person not just a place and so her guilt over having gotten Richard into his mess is real. She called him. 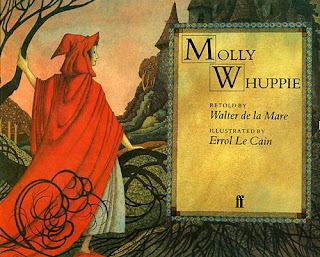 It always pleased me when reading the novel that the story switches back and forth between Door and Richard. Certainly Richard follows the classic fairy tale or mythological model. He is forced into an adventure. He is from our world so he is our point of view character. We experience London Below as he discovers it. (Unless perhaps there are folks from London Below reading the novel). But Door is on her own journey, she has had her own loss and being orphaned and seeking revenge are also fairy tale devices.

What is trickier is that there isn’t quite a direct analog for Door. She is both the entrance to this other world for Richard, but she is not just the guide to Richard. She is in the midst of her own story. Strong women in fairytales are tricky. There are a host of evil witches or bad step-mothers. There is a clever girl like Molly Whuppie. (I had the Errol Le Cain Illustrated version as a child.) The Twelve Dancing Princesses are clever but only so they can evade their father and dance at night. In East of the Sun West of the Moon and the Frog Prince the peasant’s pretty daughter and the princess go on quest but only after they had rejected a magical suitor.

A number of years ago I read Reviving Ophelia, in which psychologist Mary Pipher examines the increasing problems facing young women. She describes how strong female characters start to disappear from books for girls when they hit adolescence and those characters become increasingly focused on relationships and marriage. Door is refreshing in that she is so unique. She is strong and skilled and independent. She has vulnerabilities but does not need saving. In fact, all the women in Neverwhere are strong.

She is not just an entrance for Richard into his story. They both have stories that are tangled together like a map of the London Underground.