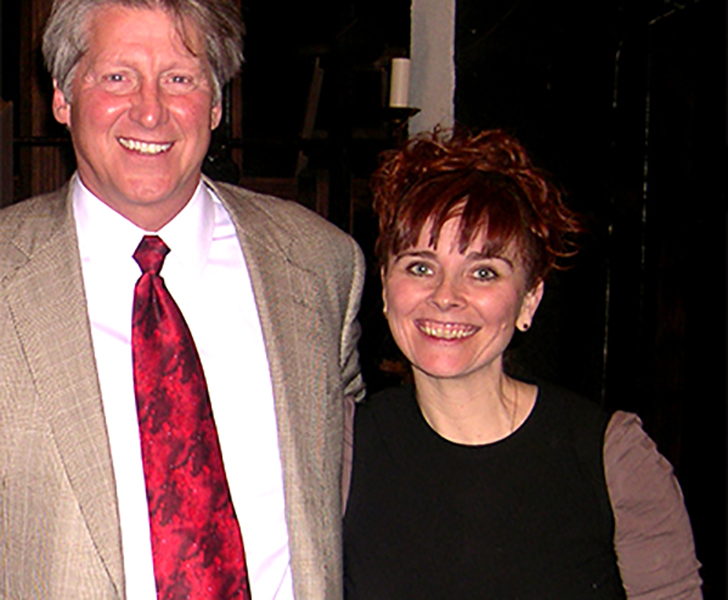 Note: This is an interview with Lifeline Theatre ensemble member Christina Calvit, adaptor of our Fall MainStage production of Miss Buncle’s Book.

Q: How did you get started with Lifeline?
A: I went to Northwestern with most of the original founders: Meryl Friedman, Steve Totland, Kathee Sills and Sandy Snyder. I knew Steve the best and he recruited me to direct Lifeline’s very first benefit, back (I think) in 1984. It was an adaptation of “Why I Live at the P.O.” My first and last directing gig. Fortunately, my relationship with Lifeline wasn’t so abbreviated.

Q: What led you to theatrical adaptation?
A: In the early 80’s, Northwestern probably had the most robust performance studies program in the country, very influenced by Viola Spolin and Compass Players and all those Second City types. As a theatre major, you pretty much took at least one or two performance studies classes, whether that was interp of poetry or short stories or whatever. So I got a taste there. Then the professors and grad students were all doing much meatier adaptations of actual novels. I remember seeing Sometimes A Great Notion and End of the Road and Bleak House all brilliantly performed. The way people were exploring narrative and narrators blew my mind. I mean, people have been doing theatrical adapations of novels for as long as there have been novels, but what I was seeing at NU was entirely different.

Q: Tell me about an early adaptation experience. What did you discover?
A: It was my very first adaptation of Pride and Prejudice back in 1986…and in previews, it was clocking in at three hours long! Meryl Friedman, who directed, invited a classmate, Michael Grief, to come see the show and give feedback. After the show, they were both up in the back blah, blah blahing and I was like “I have a bad feeling about this.” Meryl came to me later and said I needed to cut some stuff. A lot of stuff. Boy, was I mad. I made the cuts, weepily, and we got the show down by 25 minutes or so. But watching the show during the run, I really saw that they were right and now I’m always interested in hearing feedback about cuts. But I remember at the time I was like, who does Michael think he is? He ended up directing Rent, so he I’m sure he could have given me many more brilliant ideas if I had been prepared to listen.

Q: What’s your favorite part of the process of developing a new script for production?
A: My favorite part is the first production meeting, when all the collaborators get together and talk and brainstorm and start to define the world of the play. I love to hear all the inspiring ideas and listen to people build on each other’s inspiration. We get to work with so many talented designers, dramaturgs and stage managers at Lifeline.

The scariest part is first preview…I always feel like that’s the first time I see the work objectively for what it really is. Sometimes that’s a great thing. And sometimes it’s like “OK, lots to do.” I wish I were better at seeing the big picture earlier.

Q: What drew you to Miss Buncle’s Book? Why make it a play and why does it fit this moment in time?
A: Dorothy found this great article by Laurie Notaro (she wrote Autobiography of a Fat Bride, which I’ve always wanted to adapt) called “Toss the Book in Your Purse and Read These Instead.” It was basically “if you’re reading Fifty Shades of Grey, you should be reading Nightingale Wood by Stella Gibbons instead.” The article featured a lot of great forgotten books that are great reading. Miss Buncle’s Book was one of her suggestions. It rocked! Funny, meta, sweet and moving. I loved it. And I thought “the Lifeline ensemble would tear this up.” So I’m over the moon that some of them wanted to do it.

Why does it fit in this moment in time? I think the story of a woman coming into her own as a person and an artist is pretty eternal. Most of us feel stuck and squashed at certain times in our lives, which is why I think Miss Buncle’s journey feels as relevant today as it did in the 30’s.

Q: What ideas are you hoping to bring to the material that are specific to you and this production?
A: I think the idea that’s not in the book that most intrigues me in the play is the vision of a person becoming more of herself as she’s discovering what kind of artist she is and what it means to be an artist. The question of “what makes a writer a good writer” is very interesting to me. I think it plays well with the meta storyline (a woman writing a book about a woman writing a book) which is a part of Stevenson’s original vision.

Q: What do you hope the audience will appreciate most about Silverstream and Miss Buncle as they watch the play?
A: I hope they will be touched by the humanity of all the characters. And I hope they will agree with me that the observation and celebration of the small quirks of regular people in their everyday lives is an art form unto itself.

Q: What do you have coming up after Buncle that you’re particular looking forward to?
A: I’m looking forward to planning my next vacation with my husband. We love to travel. Angkor Wat here we come! Just kidding! But we’d love to!