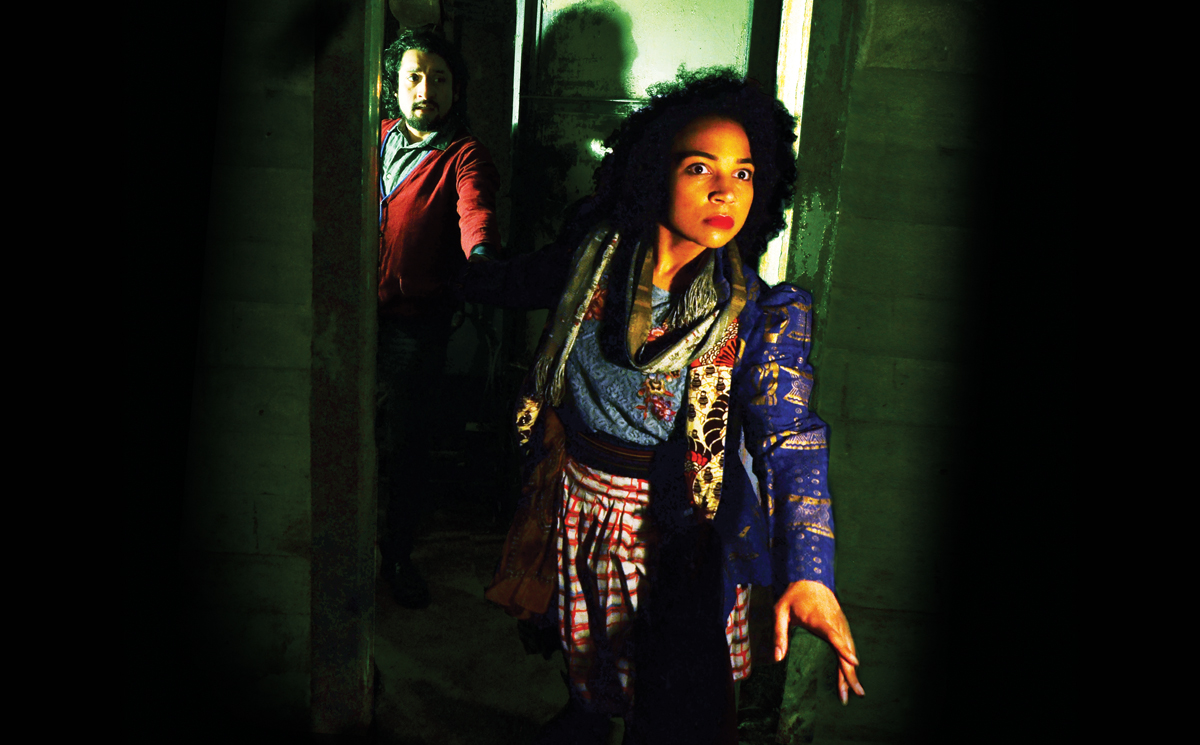 Dramaturg Maren Robinson kicks off a series of Neverwhere posts as we approach previews and opening.

There are not many times a dramaturg gets to revisit a play. Having worked on Lifeline’s first production of Neverwhere, I found when we decided to produce the play again I wanted to the opportunity to revisit London Below.

Coming back to a play, you find that there are two things that change: the context and you. In this case, I found that to be very true and in this new context Neverwhere feels especially dangerous. As I listened to director Ilesa Duncan at our first production meeting it became clear just how dangerous she saw this world to be. She mentioned the cycles of immigration to London based on its colonial history, it made me think both about the tribalism of our current political landscape but also the way individuals and communities are allowed to fall through the cracks in our society. People who have been denied a social safety net.

“London grew into something huge and contradictory. It was a good place, and a fine city, but there is a price to be paid for all good places, and a price that all good places have to pay.” -Neverwhere

Gaiman uses the realm of fantasy as so many authors before him have done to hold a funhouse mirror up to our world, our problems. Neverwhere was published in 1996, the era of Conservative Prime Minister John Major who had succeeded the wildly polarizing figure of Margaret Thatcher, known for her brutal cuts to social programs. When she cut funding for free milk in British schools she was given the moniker, “Maggie Thatcher, milk snatcher.” It was the end of an era in which many critiqued the British government for callously removing the social safety nets. Gaiman’s novel can be seen as one of those critiques and certainly offers a critique for our present American political moment.

This tension between those that have and those that do not is an old one. In the novel, Gaiman populates London Above with the “haves,” the one percenters. Richard Mayhew is an investment analyst; all his friends are tied to his workplace and they all work in banking and finance. Notably, the nature of their labor is opaque. This is the world of getting rich and not getting your hands dirty. Richard’s girlfriend Jessica is in museum work, another world of elites, and she is focused on advancing both her career and Richard’s career. She is so focused on advancement that she is willing to ignore a dirty and injured girl on the street. In fact, she perpetuates a convenient myth that, “they all have homes.”

“You’ve a good heart. Sometimes that’s enough to see you safe wherever you go. But mostly, it’s not.” – Old Woman to Richard, Neverwhere

Richard’s problem then is one of choosing to see or not to see. As soon as Richard sees — and more importantly, acts — his life turns topsy turvy and he effectively disappears from London Above. It is worth pausing to mention that Richard Mayhew’s name seems to be an homage to Henry Mayhew, author of London Labour and the London Poor. It was one of the first analyses and attempts to catalog both the jobs and the poverty of Victorian London (another historical moment of great disparity in wealth). With that lineage in his name it is inevitable that Richard will choose to help.

In London Below, Richard encounters people who have fallen through the cracks dating back to the time of the Angles, Saxons, Celts and Roman soldiers, to Victorian mudlarks, all the poor and displaced through London’s long history. That history is built in large part on the subjugation of others. Several major British banks have their financial origins in the slave trade. The wealth of England is wealth plundered from colonization, quite literally taking the resources and the labor of other nations. The shining city above is built on a lot of dark and dirty business. In London Below, that dark and dirty business is open rather than disguised. It is a place where the word of a rat might save your life. Anaesthesia, the first friend Richard makes on his journey, tells a story of parental neglect, abuse, homelessness in London Above only to be saved by the rats and join a clan of rat-speakers. Her life in the sewers avoiding people who might kill you and running errands for rats is a world that is preferable to the one she experienced before.

This critique of the capitalism and imperialism of London Above is countered by a utopian alternative. London Below is a decidedly dangerous place, but it is more honest about the danger, it doesn’t pretend to care or be safe. The social order is decidedly tribal with feudal overtones. The idealistic vision of Door’s father, who sought to unite London Below, only brings death to him and most of his family. Choosing to have a good heart is repeatedly belittled in London Below as being ridiculous at best and fatal at worst. Idealists are not really wanted in either London and bleeding hearts in London below are likely to be literal ones. So, there is another choice for Richard: Will he fight? Will Richard become a warrior for the things he values? Does he even know what he really values?

For me these questions resonate again in a very personal way in the parts of me that have changed since the first production. Even as the American income gap is bigger than ever, I find that I have asked myself what things I will fight for and these are often, what people are falling through the cracks and what am I doing to help even if that isn’t the safest or easiest choice. Like all good fantasy, Neverwhere turns these questions back on us and asks us who we want to be even if we are not likely to be picking up spears anytime soon. Then again who knows?