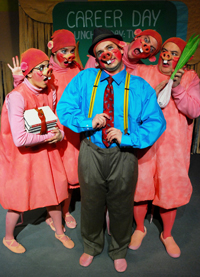 Unlike other naked mole rats, young Wilbur loves to wear clothes. By daring to defy social tradition, Wilbur makes life miserable for himself and his best friend. When the teasing and bullying at school get out of control, the pups take their case before Grand-pah: the greatest, wisest, and most naked naked mole rat ever. Will Grand-pah crush Wilbur’s self-expression, or open the door of acceptance to a misunderstood outsider? A heartwarming lesson on tolerance, in a world premiere musical adaptation for the whole family.Recommended for kids 5 and up. Children under 2 are not permitted.Based on the 2009 book by New York Times bestselling author Mo Willems (Knuffle Bunny: A Cautionary Tale, Don’t Let the Pigeon Drive the Bus!)
Adapted by Robert Kauzlaric, Music by Paul Gilvary
Directed by Paul S. Holmquist

Adapted from the book NAKED MOLE RAT GETS DRESSED. Text and illustrations copyright ©2009 by Mo Willems. Published by Hyperion Books for Young Readers. All rights reserved. Used with permission of the author through Sheldon Fogelman Agency, Inc.

From the Chicago Reader

“Mo Willems’s 2009 children’s book gets a colorful, high-energy, thoroughly charming stage adaptation by Robert Kauzlaric and LifeLine Theatre. Wilbur, an expressive, isolated, soft-hearted mole rat, has a secret so taboo that he must keep it from his strictly-nude peers, as well as his BFF Esther–he’s a fashion fanatic who spends a great deal of his private time at his closet… Paul Gilvary amps up the pro-acceptance message with a handful of cute musical numbers, and director Paul S. Holmquist’s ensemble plays well to the little ones.”

From Make It Better

The musical play, adapted from Mo Willem’s best-selling picture book uses quirky wit and humor to explore the importance of individuality and tolerance. Adapted for stage by Robert Zauzlaric, the story features Nathaniel Niemi as Wilbur, a naked mole rat who loves to wear clothes. His interest however, is met with derision from his teacher and peers who can’t understand why Wilbur wants to be different. Eventually Wilbur, along with his best friend Esther (Ellie Reed) and the rest of the pups take the issue to Grand-pah the oldest, wisest (and most naked) mole rat in the colony. What results is a lesson on self-expression, acceptance and snazzy dressing.

Niemi’s exuberance as clothes-loving Wilbur is infectious and Julia Stemper and Morgan Maher are spot on as bullies Rhonda and Beauregard. The simple set helps keep the focus on the performance and the choreography is fresh and fun. (Who knew naked mole rats could do the “robot?”) The show also provides an excellent segue for parents to talk to their kids about tolerance, kindness and acceptance, three things that never go out of style.

From Time Out Chicago Kids

Mo Willems is something of a celebrity in our house, with books like Don’t Let the Pigeon Drive the Bus and Cat the Cat Who Is That? in full bedtime rotation. So it was a no-brainer for us to borrow Naked Mole Rat Gets Dressed from the library in anticipation of Lifeline Theatre’s musical adaptation. The short and (characteristically) funny story concerns Wilbur, a naked mole rat who discovers that he likes clothes and would rather don some duds. This throws the colony into a tizzy, ostracizing the dapper young rodent.

But when Grand-pah, the “wisest and most naked naked mole rat,” hears Wilbur’s simple question, “Why not?”, he decides to make a proclamation. Spoiler alert: Grand-pah likes clothes too. The moral: How one naked mole rat chooses to express himself may not be for all naked mole rats, but naked or not, acceptance wins the day. Clearly, adapter Robert Kauzlaric had his work cut out for him, stretching out a very simple and short story to an hourlong production.

But Kauzlaric’s expansion is really strong. The play decenters Wilbur — whose main role here is to sing, dance, and don astronaut suits and fringed cowboy vests — in favor of his best friend Esther (not in the book). While Wilbur has the courage of his passion to insulate him from the bullies, Esther has to try to understand her best friend and withstand peer pressure to denounce her be-slacked buddy. So, while the book requires little more than an old man’s proclamation to make intolerance go away, the moral conundrum of the play runs deeper. Wilbur will do as Wilbur does, but the screws are put to Esther.

In that sense, the play communicates the difficulty and triumph of choosing acceptance over repudiation in a much clearer way. It almost reads as “It Gets Better” for the sandbox set (though, unlike that project, the play makes the salient point that it should really be better right now).

The song-and-dance numbers are relatively forgettable. Were it not for my notes, I couldn’t recall any of the tunes. But the actors are clearly having fun onstage, which is contagious in the audience. Mike Ooi as the teacher Mr. Clear and the formidable Grand-pah has the best pipes (poor Nathaniel Niemi as Wilbur gets drowned out by the music) and just the right amount of ham in his mole rat. Meanwhile, Morgan Maher as the braindead bully Beauregard hits all the right comic notes. All of the characters seem at home in their pink “naked” tunics, and Niemi employs some impressive gymnastics jumping in and out of clothes. Those brightly colored costumes, designed by Kimberly G. Morris, really make clothes look fun.

As I was heading into the show, one of the Lifeline staffers joked that my two-and-a-half-year-old (the theater recommends the show for 5 and up) sitting on my shoulders would be the one writing the review. And given that he laughed, cheered, clapped and called out to Wilbur throughout the entire thing, that fourth star is for him.