The City & The City

“An enjoyable potboiler with a unique twist, The City & the City is a great place to visit.”  –Time Out Chicago

“It comes together beautifully for a dramatic and satisfying climax… you’ll find yourself immersed in a tale that will satisfy both mystery and science fiction buffs.”  –Stage and Cinema

“A political murder mystery novel brought to the stage with panache and dark seriousness, as well as remarkable clarity”  –Chicago on the aisle

Inspector Tyador Borlú of the Extreme Crime Squad is assigned to a seemingly open-and-shut case: an American student found dead in the gutters of the city of Beszel. But soon this deceptively simple crime reveals ties to powerful political and corporate factions at the heart of both Beszel and its twin city, Ul Qoma. Forced to cross the divide between two city-states coexisting in the same geographical space yet separated by irreconcilable cultural differences, Borlú must bring to justice the mastermind of the most unusual and dangerous case of his career. A thrilling crime story set in a location both fantastical and eerily real, in a world premiere adaptation.Based on the novel by China Miéville
Adapted by Christopher M. Walsh
Directed by Dorothy Milne 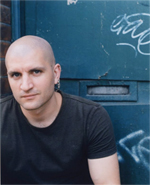 Lifeline Theatre welcomes China Miéville on Saturday, March 16th for a book signing event in our lobby at 7pm, (following shortly after the 4pm performance), and a conversation with the audience, cast, and production team immediately following the 8pm performance. The book signing and talkbacks are free events and copies of The City & The City will be on sale.

China Miéville is the author of several books, including Railsea, Un Lun Dun, Perdido Street Station, The City & The City, Kraken, and Embassytown. His works have won the Hugo, the British Science Fiction Award (twice), the Arthur C. Clarke Award (three times), and the World Fantasy Award. He recently moved from London to Chicago.

Highlights from The City & The City. Music by Christopher Kriz.

From Time Out Chicago

China Miéville’s 2009 novel, The City & The City, encases a traditional and well-told police procedural in a fascinating layer of high-concept speculative fiction. The Eastern European city-states of Beszel and Ul Qoma are close neighbors and bitter rivals whose borders are carefully monitored. They’re divided not by a Berlin-like wall but by their citizens’ sheer force of will. The two cities are physically enmeshed, with some areas designated Beszel, some Ul Qoma and some “cross-hatched,” or existing in both cities at once; it’s up to the residents to “unsee” the city and people that aren’t their own.

This is the backdrop for Inspector Tyador Borlú’s investigation of a murder that forces him across the border, as it raises questions about the political establishments of both cities as well as Breach, the hypersecret authority that enforces their separation. Several fans of the book have asked me with incredulity in recent weeks how it could possibly work onstage; the answer is, pretty impressively. Adapter Christopher M. Walsh smartly compresses the cast of characters so they can be embodied by ten versatile actors, led by Steve Schine, who plays Borlú in the hardboiled-detective vein. He gets strong support from Marsha Harman as his eager and competent Besz right-hand woman and Chris Hainsworth as his straitlaced Ul Qoman counterpart. Dorothy Milne’s simple yet specific staging and Izumi Inaba’s costumes help suggest the two intersecting environments. An enjoyable potboiler with a unique twist, The City & The City is a great place to visit.

From Stage and Cinema

A Tale of Two Cities That Blends Sci Fi and Mystery
March 4, 2013
By Samantha Nelson

China Miéville’s novels are dense works of science fiction, and sometimes deciphering them feels more like work than entertainment. That’s why it’s impressive that Lifeline Theatre’s world premiere adaptation of his Hugo Award-winning The City & The City is so accessible. Adaptor Christopher M. Walsh has stripped the 352-page book down to a taught detective story with a strange premise.

The action follows Inspector Borlú (Steve Schine), who is investigating the murder of an American student in the Eastern European city of Beszel. But as her grieving parents (Millicent Hurley and Don Bender) quickly learn, Beszel is no normal city. It occupies the same space as its rival city, Ul Qoma. While crossing between the two can be as easy as crossing the street, the residents live in fear of making such a “breach” and have been trained to ignore the foreign residents that walk among them.

Borlú’s investigation sends him deep into the strange politics and history of both cities and Schine provides a delightful noir-style hero, standing tall in the face of increasing adversity with the help of the hilariously smug Dhatt (Chris Hainsworth) and the foul-mouthed and in-over-her-head Corwi (Marsha Harman.) Plenty of cop shows and movies could use the sort of chemistry that forms between Schine and his partners. Other excellent acting turns come from Patrick Blashill as the disgraced scholar Bowden and Bender’s over-the-top leader of the mysterious police force Breach.

With inventive blocking, director Dorothy Milne and movement designer Amanda Link adeptly demonstrate the strangeness of people coming and going next to each other without acknowledging one another; a particularly well-orchestrated scene involves Borlu tailing a suspect. Costume designer Izumi Inaba plays up the difference in the two cities residents with their garb, with Beszel’s dwellers clad in drab Eastern European-style clothes — wielding dated cellphones — while the more prosperous Ul Qumans sport vibrant neons and headphones. Scenic designer Joe Schermoly’s set adds to the paranoiac atmosphere via a set of windows overlooking the stage; actors sometimes peek through the blinds and lights periodically go on and off, giving the constant feeling that you are being watched.

While the narrative may seem confusing at first look, it comes together beautifully for a dramatic and satisfying climax. It might take an act to get used to the characters and concepts, but once you do, you’ll find yourself immersed in a tale that will satisfy both mystery and science fiction buffs.

From Chicago on the aisle

Politics, murder occupy the same space in a surreal thriller at Lifeline
March 3, 2013
By Lawrence B. Johnson

If the idea of Big Brother watching your every move gives you the creeps, imagine trying to avoid attention if it’s a crime just to look at the wrong person on the street or walk into the wrong store — because all the people and all the shops occupy common space shared by two sovereign city-states. Such is the fanciful setting of China Miééville’s “The City & The City,” a political murder mystery novel brought to the stage with panache and dark seriousness, as well as remarkable clarity, by Lifeline Theatre.

In the mythic East European city of Bészel, the body of a female American student is found, apparently the victim of a violent attack. The case goes to Inspector Borlú of the Bészel Extreme Crime Squad. Very soon, two probabilities arise: A political element lies behind the slaying — the student’s research may have put her on to a firmly held inter-city secret. And the killer may have violated city boundaries, a punishable act known as Breach.

Twists and turns of plot eventually draw in the director of an archaeological dig, a disgraced professor, underground advocates of unification and entrenched defenders of the two-city arrangement. A critical shift occurs when Inspector Borlú’s superiors decide the whole matter must be handed over to police in the co-existent city, Ul Qoma.

That’s when Borlú (Steve Schine as an unglamorous but experienced cop who’s just trying to make things add up) encounters his iron-fisted opposite Detective Dhatt, also a veteran, who makes it clear who’s in charge in Ul Qoma. Chris Hainsworth’s strapping Dhatt is an immediately likable character, for all his bluster, and the camaraderie forged between the two detectives goes a long way in keeping the viewer engaged through the play’s convoluted switchbacks between city and city. Hainsworth’s Dhatt, rough-humored but ultimately practical, is to Schine’s gumshoe Borlú as John Wayne is to Columbo.

Bringing this cross-hatched manhunt to the stage was initially the work of adapter Christopher M. Walsh, who has distilled — or perhaps the word is processed — Miéville’s novel with a sure sense of cohesion amid the froth of complexities and the punctuation of surprises. It’s fun just watching this ball of yarn play out, and that’s a credit to director Dorothy Milne, who is also Lifeline’s artistic director. While the story moves forward often through Borlú’s narrative, the whirl of events is also made visible — and readily comprehensible — by the visible churn of characters bustling about the stage.

Yet, out of that human cloud representing the converged masses from both cities precipitate well-drawn characters beyond the two dogged detectives: Marsha Harmon as Borlú’s ever-ready, foul-mouthed police assistant; Millicent Hurley as the dig supervisor; Patrick Blashill as the fallen professor who may hold a key to the murder, and Don Bender as, well, a late-arriving official who, like Detective Dhatt, reveals unsuspected humanity behind a dark mask of authority.

The set, with its many doors and windows controlling the stream of players and perceptions, is the efficient handiwork of Joe Schermoly, artfully abetted by lighting designer Brandon Wardell. Izumi Inaba’s evocative costumes add much to the mixed aura of distant place and familiar function.

Lifeline’s skillful and imaginative adaptation of “The City & The City” is a head-spinning theatrical lark, even if in the end it’s little more than a guilty pleasure. But you can be sure that when the ride’s over, you walk out knowing you’ve been somewhere. Two places, actually. Just try describing them on a postcard.