Celebrating the breadth of Chicago’s enduring storytelling and live lit scene, Lifeline Theatre and Live Bait Theater are thrilled to bring 10 solo performers and 13 storytelling collectives together for a three-week, multi-venue selection of powerful personal stories.

The 2014 solo performance and storytelling festival features the work of:

And: storytelling panels and workshops led by Amanda Delheimer Dimond and Julie Ganey from 2nd Story, and Deanna Moffitt and Story Sessions alums.

TICKETS
Tickets are only $10 for each performance, and Festival Passes are available for only $30, which allow admission to any number of performances. Tickets may be purchased from the Lifeline Theatre box office (773.761.4477) or online. 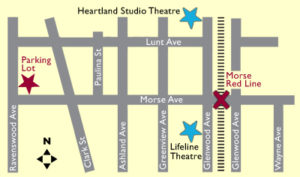 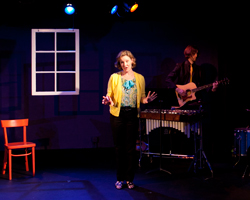 Julie Ganey, theatre and storytelling veteran, and longtime resident of Rogers Park, asks, “What does it mean to be a good neighbor in one of the most diverse communities in the country?” A tenacious look at how we misunderstand, mistake and misjudge each other – and choose to live together anyway. 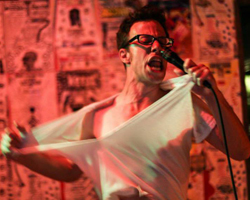 Nick Ward is a writer, storyteller, producer, production manager, casting person, and very occasional actor who has worked with Steppenwolf Theatre Company, Theatre Seven of Chicago, Sinnerman Theatre Ensemble, PineBox Theatre, and PR Casting. He has been a company member with 2nd Story since 2006. 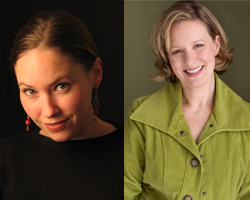 What’s your story? (You know you have one.) 2nd Story’s Amanda Delheimer Dimond and Julie Ganey offer a storytelling and solo performance workshop open to the public. Explore digging into your own experiences, what makes a great story, finding your voice and crafting your real-life piece for an audience, all in 2nd Story’s uniquely collaborative style. Grab your journal and join in the fun. 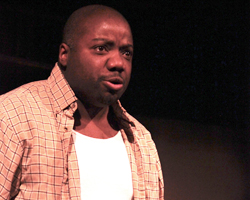 “I’m a guy. Sometimes I listen to Madonna. Sometimes I cry. So what? Stop judging me! It’s My Penis and I’ll Cry If I Want To talks about men and women who don’t necessarily behave the way society says they should. Like me!” 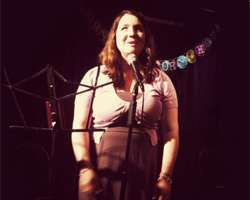 The BYOB Story Hour is an intimate night of storytelling and live music. Once a month, six of Chicago’s best storytellers take the stage to share personal narratives based on that month’s theme. In addition to hearing some incredible stories, you will also get to see a live musical performance by local Chicago musicians. The event is normally BYOB (hence the name) but we are sure it will still be a night of laughter, tears, and music! 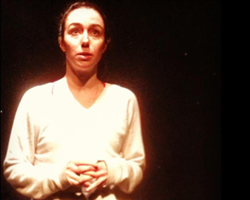 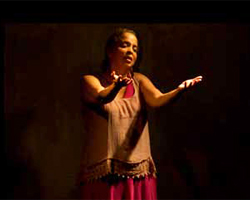 Trapped by varicose veins, hot flashes and that “middle-aged middle,” Marty longs for her childhood on the South Side of Chicago, where all she cared about was listening to James Brown, dancing with her father and developing into a “Brick-House!” Using humorous flashbacks and music, Big Butt Girls takes us along on a hilarious and touching ride with Marty as she uncovers true beauty and the meaning of self love. 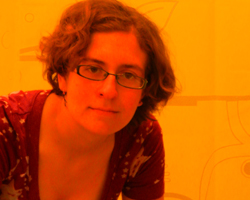 Virgo: The Screenplay
Written and performed by Liz Baudler
Directed by Katherine Chronis

Liz Baudler is a Chicago writer who is likely at this point more famous for being a lesbian than a writer. Nevertheless, her writing appears in Newcity, Hair Trigger, and Feathertale. Her piece deals with her indoctrination into the sinister lesbian cult. Thanks to Katherine Chronis and Kat Kidwell for all their love and support. 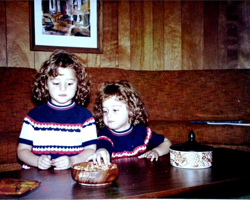 What’s It Like Being a Twin?
Written and performed by Eve Brownstone

What’s It Like Being a Twin? is an exploration of identical twindom. I got answers!! 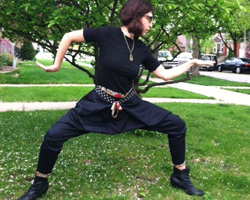 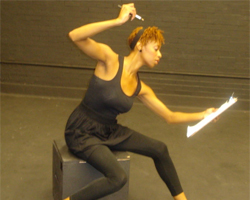 The Composition of a Bad Date
Written and performed by Jade C. Huell

Scholar-Artist Jade C. Huell is an experimental theatre director, performer, and movement/poetry coach. Her work centers on memory, the body, and community performance. 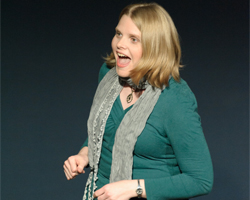 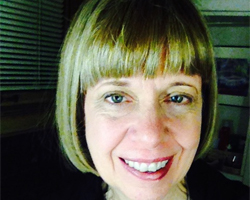 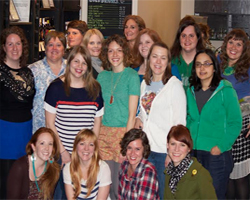 An all-female comedy group that encompasses the distinct voices of up-and-coming Chicago performers. The kates provide an intimate night of comedy with pieces ranging from darkly amusing musical numbers, the awkward art of clowning, absurd solo performances, and uproarious stand up comedy. 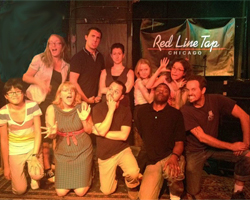 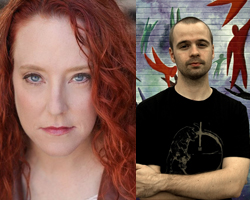 Birth. School. Work. Rock. Heartbreak. Taxes. Death. As the sure things fall through and what seemed so real has all faded away, a young woman is left to search for answers, while a young man is stuck trying to understand the questions. 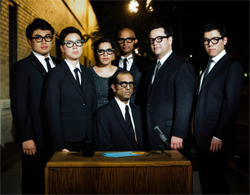 “We are Asian. We do comedy.” Based in Chicago and one of the nation’s premier Asian-American sketch comedy troupes. Having worked with The Second City and iO, Stir Friday Night has become a fixture in Chicago’s illustrious comedy scene. 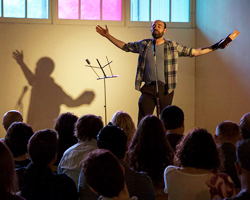 Story Club is like Fight Club, only they tell stories instead of punching each other and everyone talks about it. Story Club mixes the spontaneity of an open mic with the experience of live theatre. 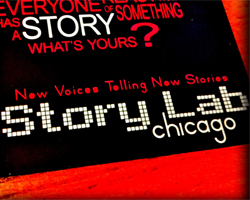 Story Lab Chicago is a storytelling series that has put over 200 new or first-time tellers on stage. Everyone has a story, and everyone, regardless of experience or background, is encouraged to tell it. 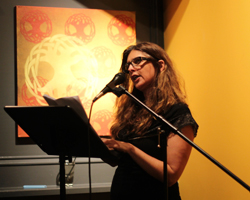 Story Sessions is a collection of performers sharing true personal stories that tug at your heart strings, tickle your funny bone and take your mind on a wild adventure. 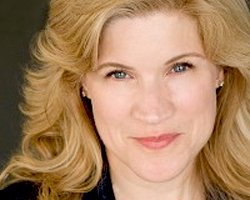 Friends with Words: Building Creativity and Community Through Storytelling Panel

Story Sessions host Deanna Moffitt will sit down with some of the show’s alum to talk about why they love the art form, what drives their craft and what makes their stories unique. We’ll also uncover great tips on how to start your own story and what to do with once you’re ready to share your tale with others. 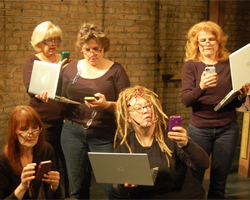 The Sweat Girls speak with honesty, authenticity and humor about the human condition as they’ve experienced it. They have been writing and performing storytelling shows in Chicago for over 20 years. 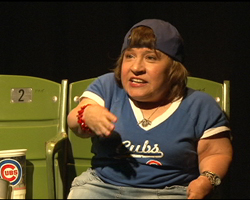 Tellin’ Tales Theatre builds community through story — adult solo performances as well as “Six Stories Up”, a mentoring program and show featuring kids and adults, with and without disabilities.

Tekki will be joined by Barrie Cole, Andrew Marikis, and Maia Morgan. 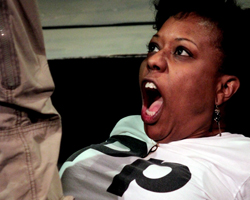 How I Jack Master Funked The Sugar In My Kneecaps!
Written and performed by Penelope Walker
Directed by Marsha Estell

From dance recitals, to dance halls; from high blood sugars to no count prophecies! Come cut a rug with Penelope as she takes you on this no holds barred, fantastical journey of house music & diabetes! 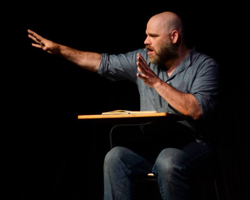 A Life in Tending
Written and performed by Eric Warner

A few years ago Eric Warner broke into the abandoned Purple Hotel, just to explore. ‘Cause he’s always been curious about it. Not because he is a hoodlum. Inside the hotel he found his grandma’s house. ‘A Life in Tending’ is a multimedia monologue; a tour through a decrepit Chicago landmark, a story about how our identities can be tied to a place, and what changes when that place deteriorates or vanishes. 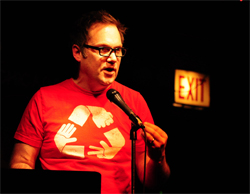 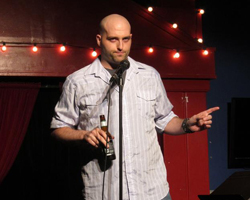 A group of real people telling real funny stories about their lives with a theme as their guide. They laugh at themselves and laugh with each other. Everyone has a story to tell — what’s yours?

FESTIVAL HISTORY
Live Bait Theater developed more than 200 world premieres over its 20-year history and was nominated for over 50 Non-Equity Jeff Awards, predominately in the category of New Work. Sharon Evans was the Artistic Director from 1987-2008, and in 1995 she created the Fillet of Solo Festival, which featured over 200 solo artists in its first 13 years.